A very talkative cab driver drove Bridget & Iain the next morning to the station from where they took the train back to SPB. They will do some more sightseeing whilst Dirk and I will sail Blue Dove down through the river Neva towards SPB. And they’ll join us again for the night when we will be going through the bridges. Talkative cab driver turned out to be most useful. He drove me round to get the gas bottles filled (I have Russian gas bottles). He did talk the ears off my head but the job got done. The only bridge across the Neva river that needs opening for us (Kuzminskiy Bridge) is free in weekends so we had to wait a day.

Next morning, we dieseled up and left to catch the bridge at 13.30. Beautiful day without any noticeable wind. The river current is very strong and at some point we were doing 10knots! We went through Kuzminskiy bridge together with a gigantic icebreaker which would also be going through the SPB bridges that same night. Impressive ship that!

We parked the boat in y/c Vostochniy, a poor excuse for a marina. Only one pontoon had shore-power, no water, no showers and this all for the grand sum of 2000₽ for 24 hours. Since we were only going to stay until that evening, I thought that was a bit steep. Marched up to the management to complain but only beat them down to 1300₽. Would avoid the marina but it is a useful spot just before or after having gone through the SPB bridges. At least it had a decent restaurant, tad simple decor but good wholesome Georgian cuisine washed down with pomegranate wine. This is where Iain and Bridget joined us again. And where the pilot came on board too. Pilots are mandatory to sail through the open SPB bridges at night. This year the pilot fees have increased enormously, especially for foreign-flagged boats. I almost decided to take the mast down and go through during the day – almost for free.

Going the other way, from the sea through the SPB bridges towards Ladoga takes a long time because of the current against you. After such a long night you may want to get some sleep first. If you are ok with a bomb site, marina Vostochniy is just the place to be. Perhaps we were too early in the season. Tying up somewhere along the river embankment is a definite no-no as I experienced last year. I was telephone-bombed to get me going again.

The pilot came on board shortly after midnight, the silent type, who climbed onboard without so much as an hello and/or introduction. He then announced we would not get going before 02.30 am. So there we sat in a tiny saloon in the dark (no shore-power and no wind) with a very uncommunicative pilot even in his own language. I was the only one who could talk to him. Drawing him out of his shell was difficult. We did coax a few stories and a smile out of him but he was hard work. He used to be a captain on a river cruise ship before he retrained as a pilot. Apparently you need to do 35 crossings through Saint-Petersburg as a trainee pilot before you get your initial license. Then you are only allowed to pilot cargo ships through. After a few more years, you finally receive your full license when you can pilot all classes of ships. So we sat there and waited. Getting a drink to break the ice of awkwardness was not an option either because we still had to sail. Drinking and sailing not allowed here. It was a relief to be finally on our way. At least the boat was warm as toast. With new gas bottles and a new washer, the heater was performing well. Pilot would therefore not come out of the companion way because he was insufficiently dressed. May not have realised that small sailing yachts generally do not have heated bridges. Ah, well!

The trip through the bridges was fabulous! All buildings along the Neva are lit. One goes through in a long convoy of ships each with their own imposed pilot who all communicate in their typical pilot ways over the radio. We arrived in Krestovskiy marina opposite of where we stayed last year. Less thumping noise from the next door restaurant and less current. After a last whisky, time for a well-deserved coma.

Thanks Bridget and Iain for the pictures! 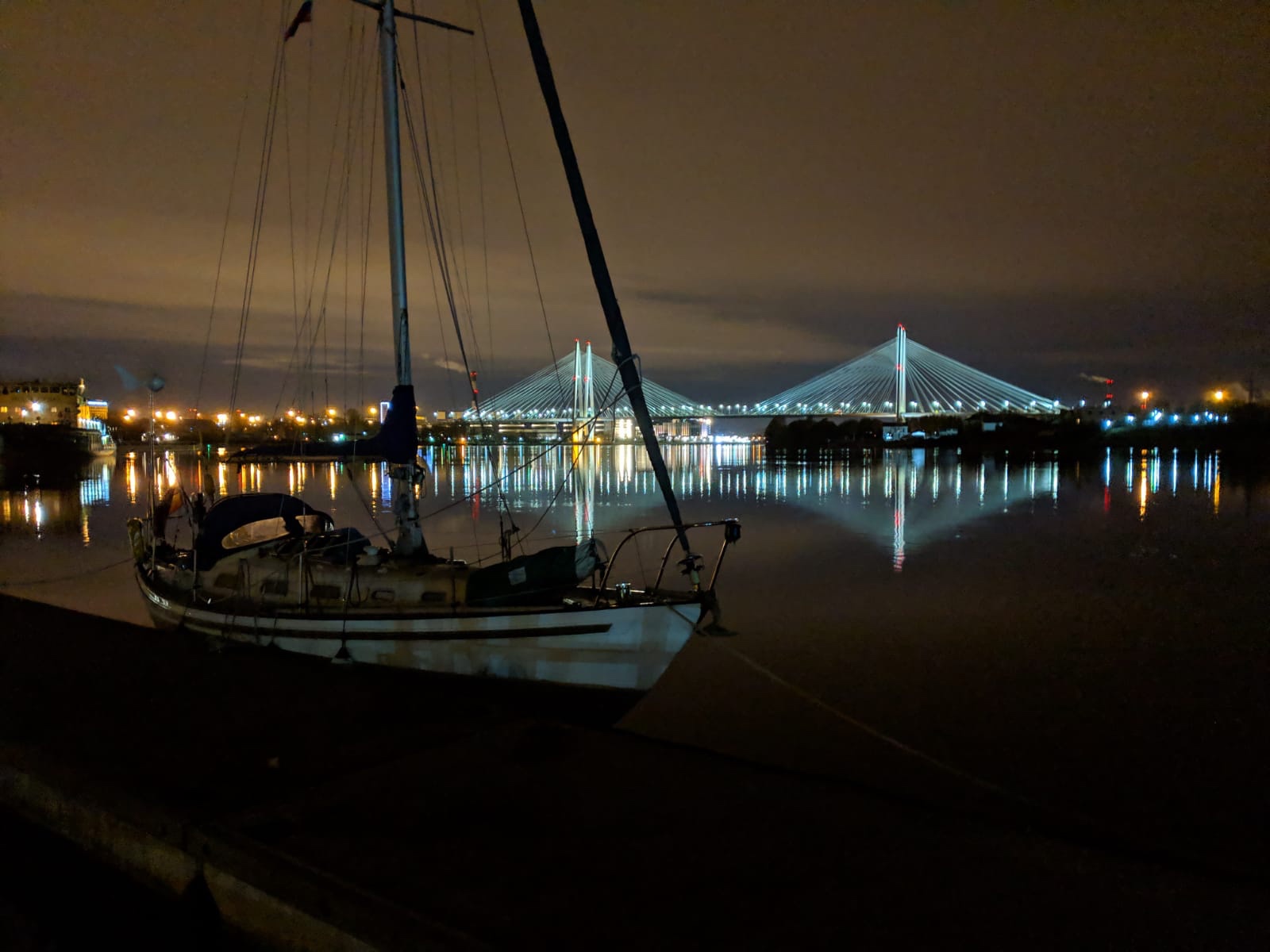 Blue Dove waiting to go through the bridges. 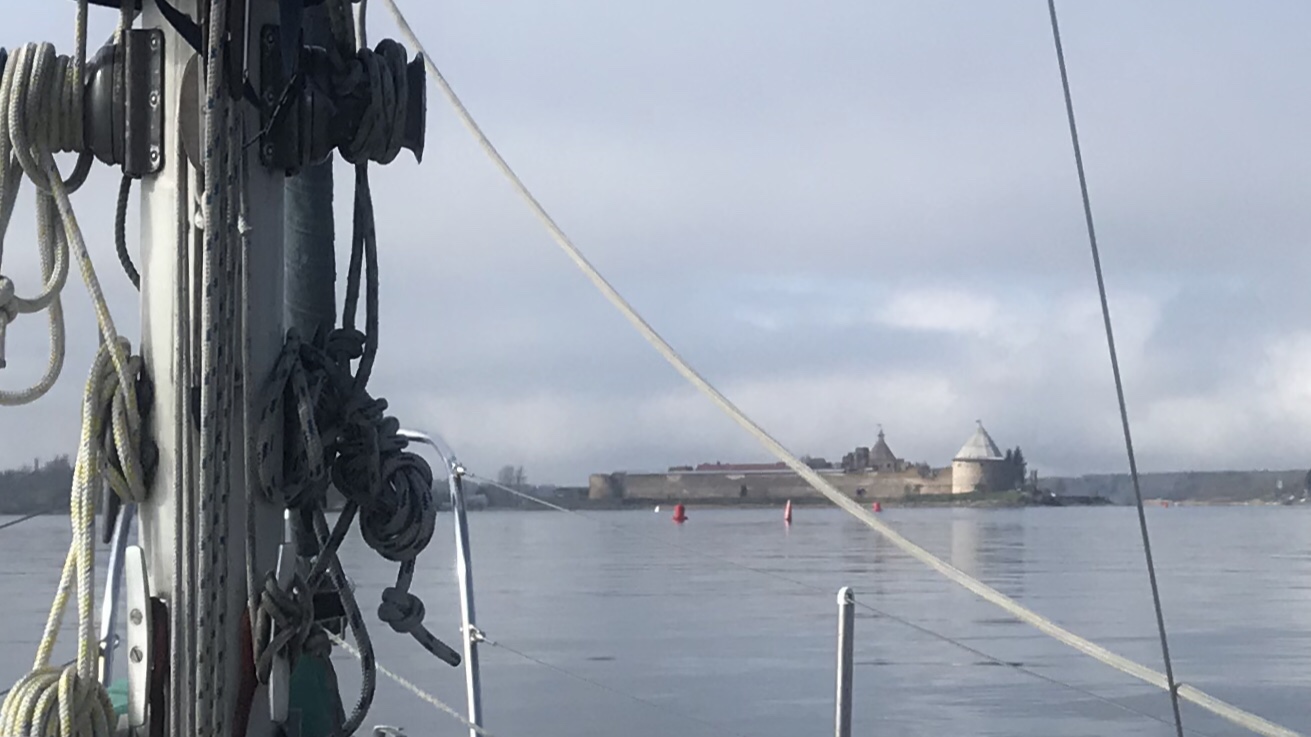 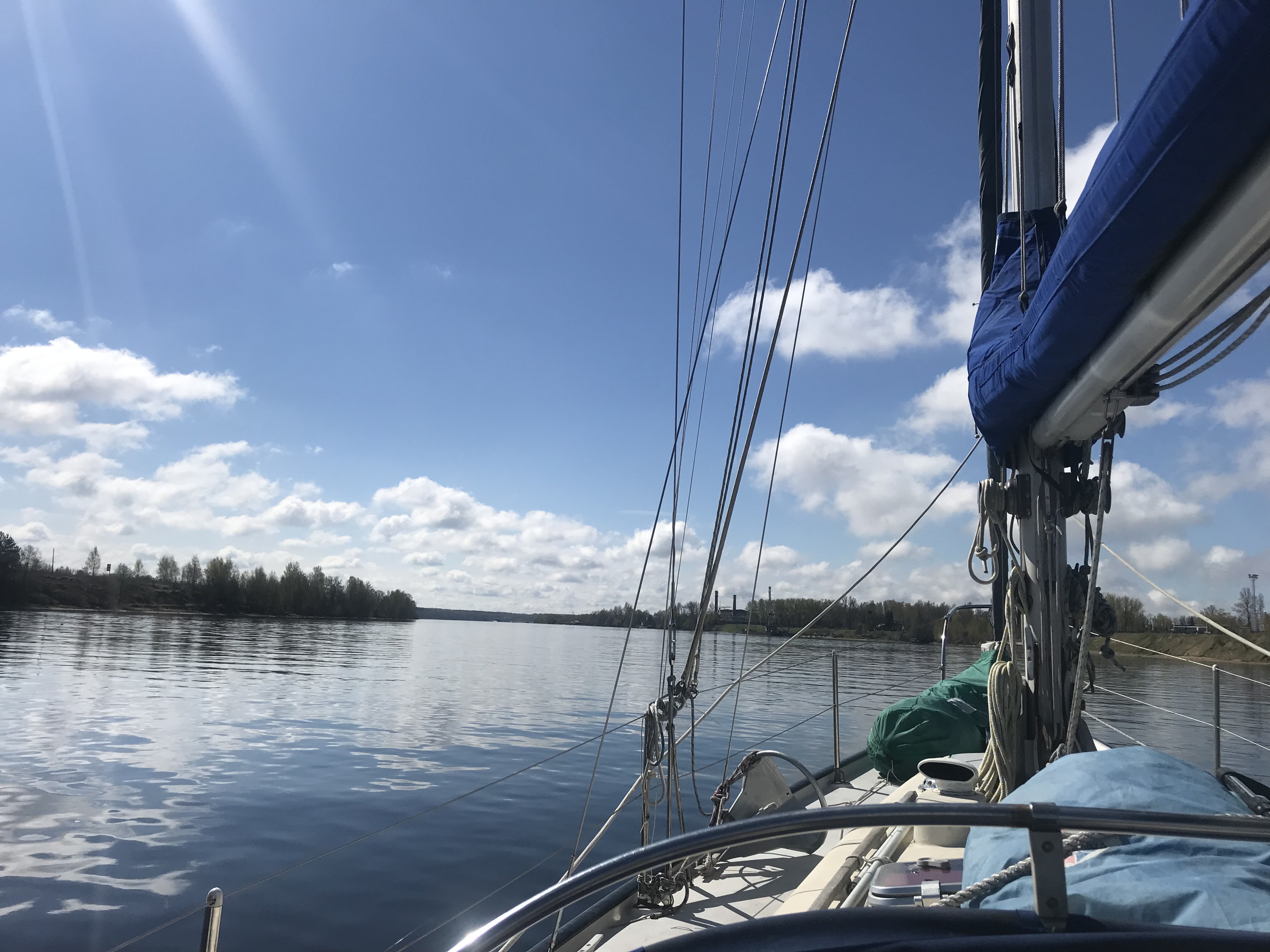 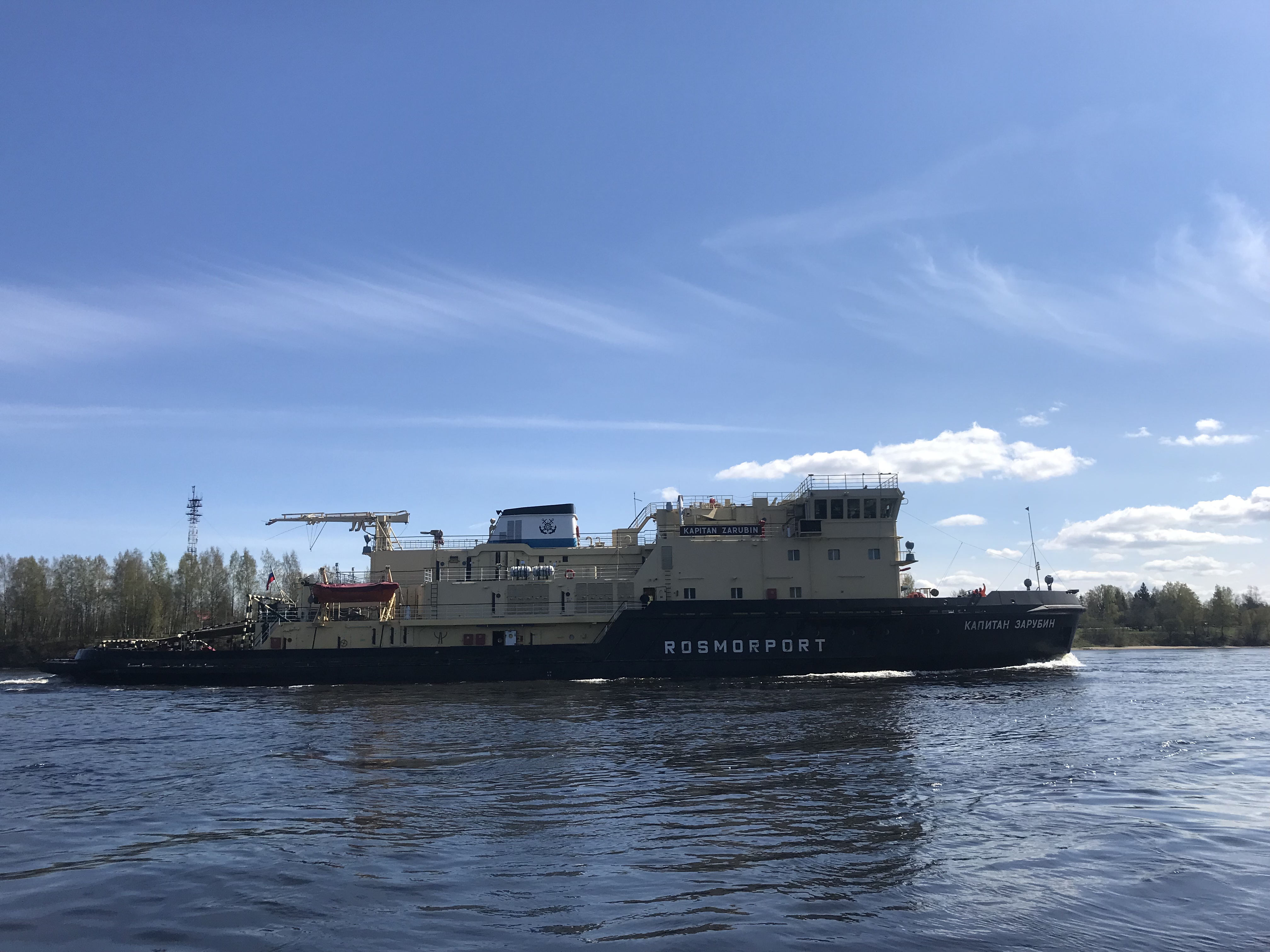 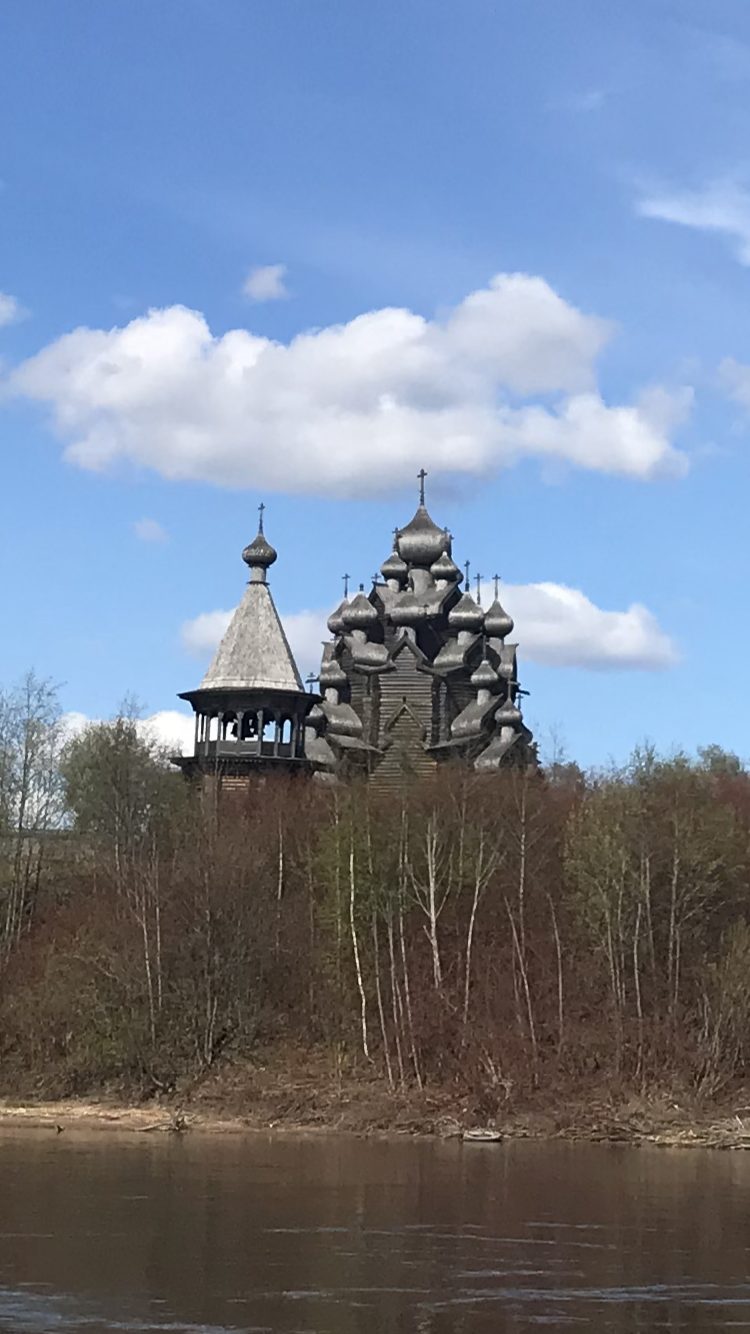 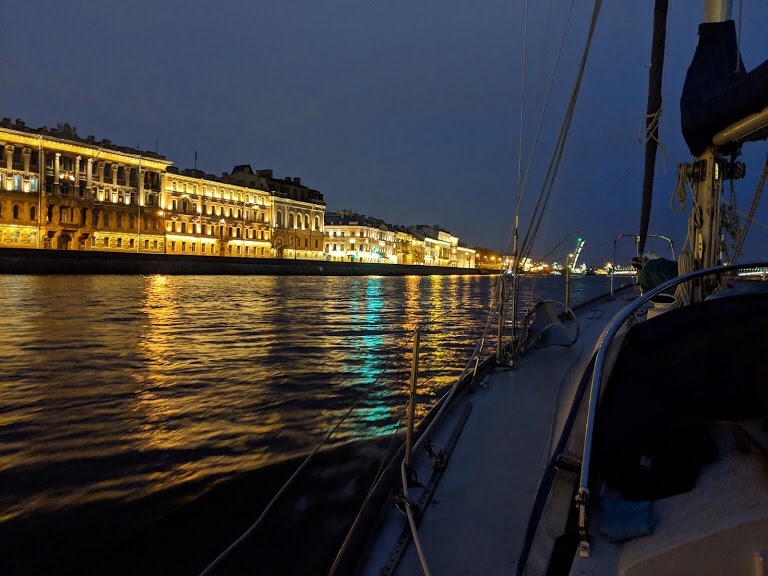 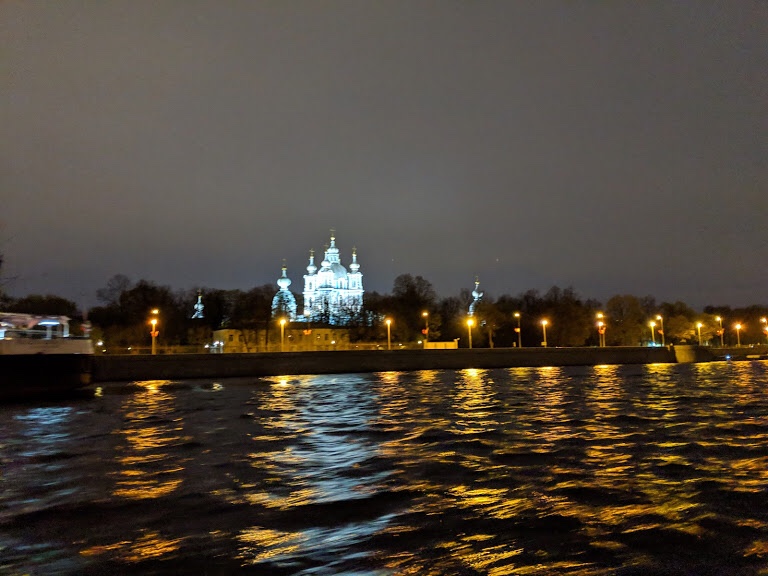 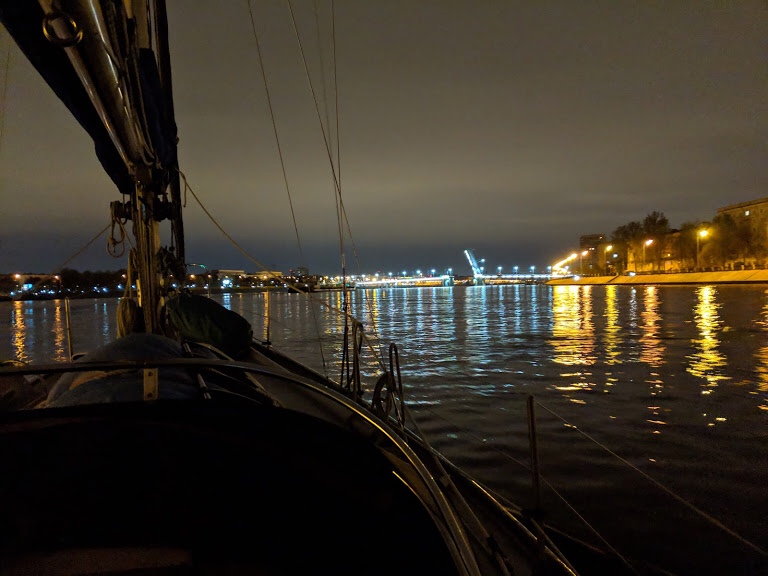 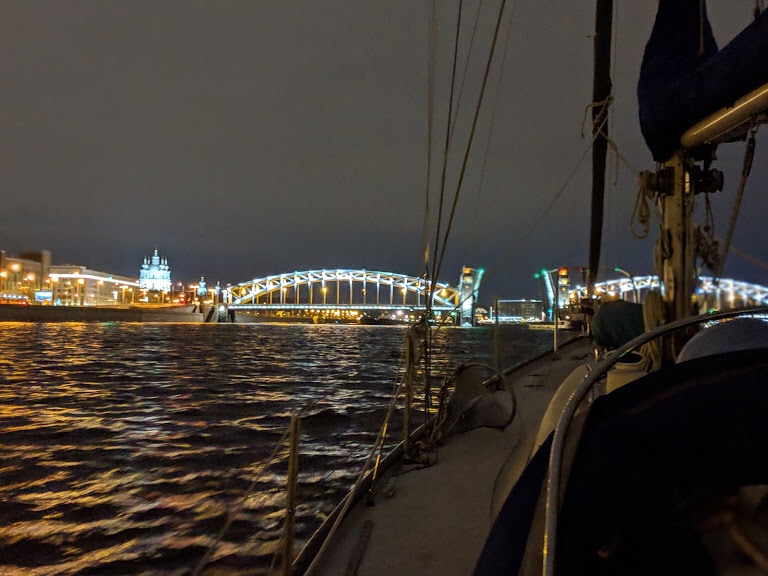 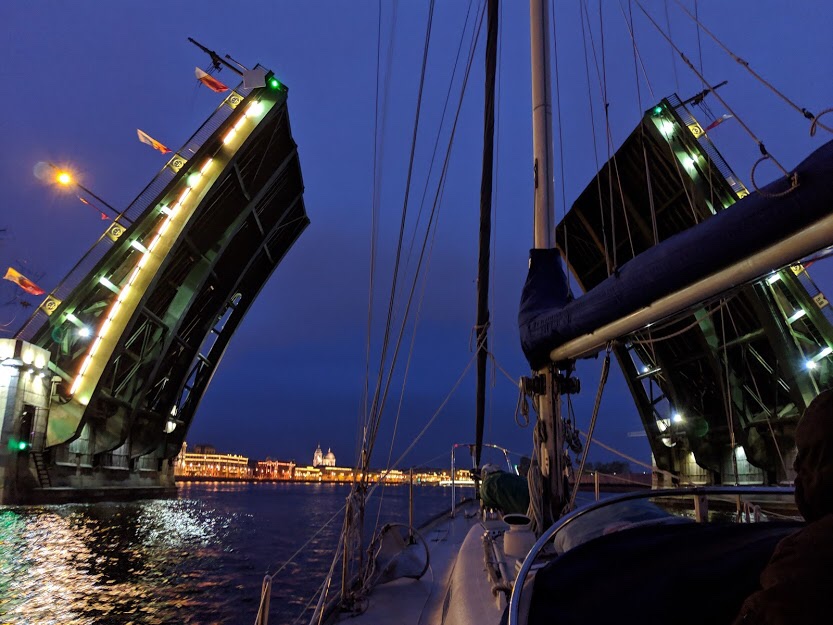