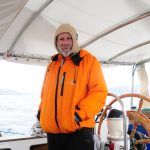 I first went to sea as a cabin boy in a Norwegian coal ship after 2nd year medicine. I have never been long away from the water since, and I suppose the sea is in my blood. The world is shrinking fast and the sea is one of the few places which remains remote – from Sydney you only have to go 10 miles offshore and you are in an environment which in many ways hasn’t changed since Cook and Flinders were there. The risks, solitude, the beauty and the need for self-reliance are the same.

I am not a brave or an aggressive sailor. I left ocean racing behind long ago because I just didn’t have in me the competitive spirit that sport demands. Indeed, the more I sail the smaller the ocean makes me feel and the less I seem know. But perhaps that is senescence creeping up. To compete with the sea is to invite disaster. After every ocean crossing I think “well, that was another lucky one”.

What is the attraction? There are two wonderful things about ocean voyaging – setting sail, and arriving in an unknown port or harbour. The bit in the middle I tolerate but don’t love – there aren’t enough laundromats, fresh apples and undisturbed sleeps in the Southern Ocean for me. I have learned to tolerate seasickness but it has been a constant, unpleasant companion of mine through all those years.

I started sailing 50 years ago and ocean racing 10 years later, when I got a 12 month job as a paid hand on a racing yacht in the English Channel. Then, after a number of yacht deliveries to and from the Med I began to realise that I would never get back to medicine without concerted effort . So one winter I took a position as MO with the UK Dept of Fisheries distant water trawler fleet off the north coast of Iceland – a sort of addicted sailor’s Betty Ford Clinic, where I vomited, learned to read the northern lights and refreshed my theoretical medicine before returning to the clinical fray.

Working back in Sydney, ocean racing had become a passion but when I look back I know that it was being at sea, not winning or losing races, which attracted me.

9 wonderful months working in PNG cured me of any desire to pursue a career in urban specialist practice. I bought Awatea and sailed off into the Pacific for 2 years, doing locums in odd places along the way.

At home again and penniless I sold the boat and in short order got a job, got married and had (and still have) 2 gorgeous daughters. I was restless though, with the sea always lurking in the wings. 3 more ocean sailing yachts helped keep the dream and the lure alive during that time. I admire those who voyage with their children. We tried it but didn’t get further than Lord Howe Island and Tasmania. We found it too hard on all involved. I advise newlyweds to think seriously about postponing voyaging until their kids are in their teens and to devote themselves to nesting during the formative years.

Work during this time had me travelling widely in SE Asia and Australasia but always with a briefcase, not a jibsheet in hand. It didn’t feel right. But in the short term the joys of parenthood and fireside dreams were enough. With the end of my marriage however, I could no longer suppress the restlessness I had felt for so many years. “Tainui” came along and one of my longest held dreams – exploring Patagonia – loomed large.

Then I met Chris, a dedicated GP in remote indigenous practice, and she introduced me to another ocean – the desert of Central Australia. I have been fortunate to have known her. She enjoys her solitude, our departures and reunitings. She talks of the pleasure of parallel journeys and I sometimes had to remind her that parallel lines never meet whereas ours did, and we must always reconnect at the end of each segment. For 11 years she was my constant but often absent companion although our paths now cross less often now.

Many cruising yachtsmen become troubled by aimless solipsism, which tends to emerge after a couple of years away with no rules, no sense of purpose and neither obligation nor opportunity to put the lifestyle temporarily aside and do something completely different. That is one of the reasons why I am so lucky, so privileged to have access to these two diametrically opposed modes of living. 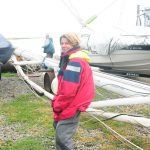 Maxine is originally from the Netherlands but has lived in Russia since time immorial. At least that is how it feels. When Gorby became president, it became easier to obtain visa and off she was off to see whether the USSR was really so different (well, yes and no).She never intended to stay that long but somehow it just happened. Russia even tried to keep her out at some point but a Russian judge ruled in her favour. Maxine is a lawyer by training who ended through legal publishing in newspaper publishing.

Maxine has been sailing since childhood on the family boat. Now however, she is commited crewer. She decides on a route and chooses a skipper with boat accordingly. And that is how she ended up organising s/y Tainui’s voyage through the Russian inland waterways.